Global action to combat HIV/AIDS has had an immense
impact in the African Region. By the end of 2017, 15.3
million people living with HIV (PLHIV) in the African
Region were accessing life-saving antiretroviral drugs (ARVs),
representing 70% of the 21.7 million people accessing
antiretrovirals (ARV) globally (1).
WHO and the Joint United Nations Programme on HIV/
AIDS (UNAIDS) have set the target of 90% of people living
with HIV on antiretroviral therapy (ART) achieving virological
suppression by 2020. However, the potential positive impact
from the scale-up of ART is under threat from an increase
in the prevalence of HIV drug resistance (HIVDR). As the
prevalence of HIVDR in the African Region increases, the
impact on society, the economy and on health could be
severe (2,3). If the prevalence of pretreatment HIV drug
resistance (PDR) to non-nucleoside reverse-transcriptase
inhibitors (NNRTIs) in sub-Saharan Africa exceeds 10% and
NNRTIs continue to be used in first-line ART regimens, over
a five-year period, NNRTI PDR may be responsible for a
cumulative 135 000 AIDS-related deaths, 105 000 new HIV
infections and an additional US$ 650 million will be spent on
ARVs in sub-Saharan Africa (2).
In response to this emerging threat, the World Health
Organization (WHO) launched the Global Action Plan (GAP)
on HIV Drug Resistance in 2017 (3). The GAP, developed with
WHO’s partners and stakeholders, outlines a framework for
action to minimize the emergence and transmission of HIVDR
and to ensure the most effective treatment for all PLHIV. It
outlines suggested actions for Member States and other
stakeholders according to five strategic objectives:
1. Prevention and response: Implement high-impact
interventions to prevent and respond to HIVDR;
2. Monitoring and surveillance: Obtain quality data on HIVDR
from periodic surveys; expand the coverage and quality
of routine viral load and HIVDR testing; monitor quality of
service delivery;
3. Research and innovation: Encourage relevant and
innovative research, leading to interventions that will have
the greatest public health impact on minimizing HIVDR;
4. Laboratory capacity: Strengthen laboratory capacity
and quality to support and expand the use of viral load
monitoring and build capacity to monitor HIVDR in lowand
middle-income countries; and
5. Governance and enabling mechanisms: Ensure that
governance and enabling mechanisms (advocacy, country
ownership, coordinated action and sustainable funding)
are in place to support action on HIVDR.
The WHO African Regional Action Plan (RAP) on HIVDR
articulates the priorities of the African Member States to
monitor and prevent HIVDR as well as ensure availability
and effectiveness of life saving ARVs. Implementation of
the strategic objectives of the GAP since 2017, although
slow, has progressed in some Member States in the
African Region. Hence, to ensure implementation of the
recommended set of actions outlined in the the GAP, the RAP
adapts the GAP’s strategic objectives to an African context
and prioritizes suggested actions based on feedback from
WHO Member States. The five-year RAP extends beyond
2021 and is aligned with the WHO thirteenth general program
of work (GPW 13) 2019 -2023.
The objectives of the five-year (2019 - 2023) Regional Action
Plan on HIVDR are:
1. To raise the priority accorded to the prevention of and
response to HIVDR in national and regional agendas
throughout the African Region.
2. To strengthen national commitment, capacity, governance
and partnerships to accelerate country responses for the
prevention, monitoring, and response to HIVDR.
3. For Member States to work collectively to implement the
strategic objectives.
The RAP strives to contribute to the global drive towards the
90-90-90 targets. 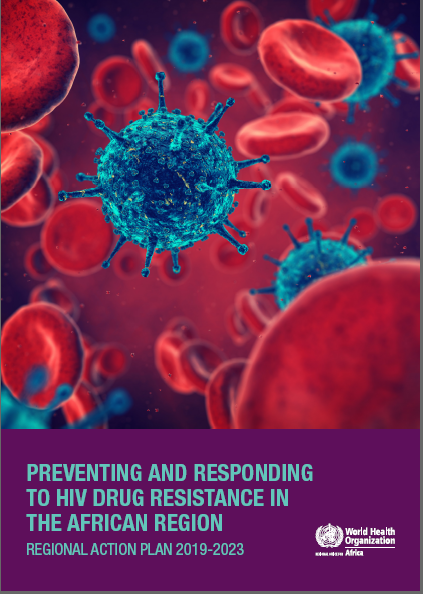